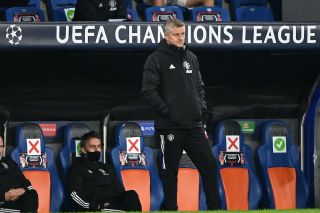 Dimitar Berbatov believes Ole Gunnar Solskjaer could be sacked as Manchester United manager if the Reds fail to beat Everton at Goodison Park.

Solskjaer is under mounting pressure after an inconsistent start to the season that has prompted more questions than answers at Old Trafford.

Wednesday night’s defeat to Istanbul Basaksehir in the Champions League was a serious low point for United, as Solskjaer elicited no response from his team after the poor showing at home to Arsenal just three days earlier.

This lunchtime’s fixture against Carlo Ancelotti’s Everton cannot be underestimated given United are 15th in the league table and could drop as low as 17th with defeat before the international break.

Former United striker Berbatov has suggested Solskjaer cannot afford a disappointing result if he is to retain his job.

“Ugh, here we go. Everton have had a blip since their good start, and it just shows, again in football- consistency. They have their blip, then lose another, and all of a sudden a good start is ruined. This is the difference between big clubs and small clubs I think. Ole needs a win here to avoid being sacked I think. I think we might see a draw here. Prediction: 2-2.”

Ultimately, we feel it is unlikely a decision will be made in the aftermath of this game, regardless of the result.

United are just six games into the league campaign and Solskjaer should have banked some credit for helping the Reds achieve an improbable third place finish after lockdown.

But a defeat today would bring incredible scrutiny during the international break, and Mauricio Pochettino’s shadow with loom even larger at Old Trafford.