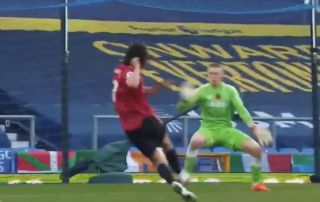 Edinson Cavani is off the mark for Manchester United.

The Uruguayan scored after a being gifted a pass by Bruno Fernandes, who was running towards goal in search of a hat-trick.

Fernandes took the opportunity to help a teammate because he was mindful of the fact Cavani had yet to score for United.

Although the former PSG goalscorer isn’t exactly under pressure at the moment, it will help that he’s got his first goal out of the way because questions would be asked if he went through a dry spell.

Cavani took his goal well and you just knew the ball was hitting the net when it arrived at his feet.

Watch an alternative view of Cavani’s goal below – or see the televised angle here: