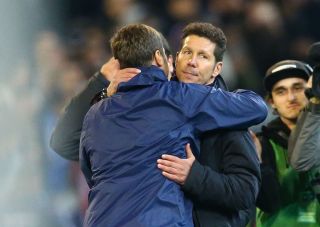 There’s more talk than ever before about Mauricio Pochettino becoming Manchester United manager.

They have been discussing the situation on talkSPORT this morning with former Manchester City player Trevor Sinclair in the studio.

Sinclair questioned whether Mauricio Pochettino’s football is attacking enough to suit how United fans want to see their team player, but he then ironically claims Diego Simeone would be a better fit.

I’m not sure if Sinclair watches much football but Atletico Madrid have been a defend first side under Simeone for some time.

Simeone’s football is brilliant when it’s done right, but I do think I would prefer Pochettino if it came down to the two.

👊 “Simeone’s teams are aggressive, play on the front foot, super fit.”@Trevor8Sinclair thinks Simeone would be a better for #MUFC than Poch!

Sources close to Stretty News have downplayed reports that Manchester United have contacted Mauricio Pochettino about taking over from Ole Gunnar Solskjaer. The same Old Trafford source made it very clear that the board are behind the current manager.

But there’s no smoke without fire and we won’t be playing a blind eye to the Pochettino speculation.

Miguel Delaney of The Independent claims Pochettino is keen on the United job, as is former Juventus manager Max Allegri, so it’s clear that the pressure is building. That said, the report backs up what we’ve been told re: Solskjaer… that there is little desire to sack Solskjaer at this moment in time.

The club wants to give the manager time to rectify his position and they clearly believe that he will.