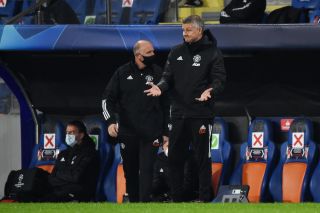 We have a special podcast episode to bring you this morning to tackle the ongoing speculation over Ole Gunnar Solskjaer’s job at Manchester United.

I am delighted to be joined by one of the blog’s leading writers Ben Parsons to chat as pressure mounts on Ole Gunnar Solskjaer as manager after Manchester United’s latest defeat against Istanbul.

It’s a tough time for any football fan when the media is speculating over the manager getting sacked, and it doesn’t help that Mauricio Pochettino is waiting on the wings for a call from Ed Woodward.

That pressure has always existed, though. Since Solskjaer got the job on a full-time basis there has been always been talk about Pochettino. Not helped by our form, which has been up and down, but it’s arguably more real now than ever.

Dale gives his views on Solskjaer – a man he and Ben still hold utmost respect for – and they both ask what is the next step as United find themselves in the mud after a poor start to the 2020-21 campaign.