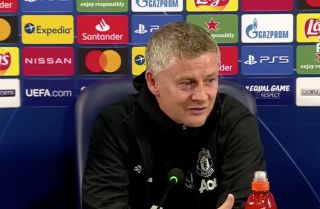 Manchester United manager Ole Gunnar Solskjaer has belief in himself that he is the right man for the job.

The Norwegian’s future has been put under question after two defeats to Arsenal and Istanbul, with the media upping the volume on the speculation surrounding former Tottenham Hotspur manager Mauricio Pochettino, who has been out of work since being replaced by José Mourinho at the north London club.

You’re not better than your last game, so United need to travel to Everton in a positive frame of mind. Solskjaer is trying to keep his players focused but he needs to do something about the lack of consistency.

There are fine margins, of course, and we all know results make the headlines. But if Solskjaer doesn’t pick up better results and show consistency he will be out of a job soon.

Asked about his job as United manager, Solskjaer said (via Manchester Evening News): “Yeah, you have to be mentally strong, there are demands on Manchester United players, coaches and manager.

“There is an expectation, we are at the best and biggest club in the world and you don’t expect anything but criticism then, it’s how you deal with that setback and from what I’ve seen from the boys they’ve been very focused.”

Everton have been an in-form side this season (4th in the Premier League) but they go into this fixture on the back of two defeats in two weeks.

But United are in the same boat after two shocking displays against Arsenal in the league and Istanbul in the Champions League. Solskjaer needs a reaction from the players this weekend.

“We had a very long and late flight back home so we were here early Thursday morning, landing in Manchester, the Thursday was a day of tired minds and legs and we couldn’t do a lot,” he said.

“Today has been a bright tummy day in Manchester for a change and the boys are ready for a reaction. We’re all hurt, it’s never easy and never enjoyable when you lose two games on the bounce and you’ve got to react to it.

“We know Champions League games are difficult, you don’t mind when they outplay you but we gifted them the goals.”

Squad mental is important. We can’t afford to lose this week, as The Independent’s Miguel Delaney described the fixture as “massive” in his piece on Ole, Mauricio Pochettino and Max Allegri.

“Every time you play for United, passion and fight are the things you expect to see, to earn the right to win a game of football you need that and definitely against Everton, with or without fans at Goodison Park, you still have to have that fight and passion in you, that’s a given,” Ole added.

“Times are different, times are strange, there is a strain on the players. Football is not the same without fans and passion. I don’t think anyone’s been in the situation the players are now – they’ve had months and months of playing with uncertainty and unknown with the virus and pandemic.

“We have to look after them, physically and mentally and think how my players cope with the whole situation. I’m a definite believer in these boys and will come and show how much they care.”

James Cooper from Sky Sports asked Solskjaer how he was feeling.

“I’m good, you don’t have to be happy to still stay positive. You know on different days, hard days, in life, there will be better ones coming and I know these players well enough and I trust them to have a response.

“Going out there, enjoy wearing the shirt against a good team, it’s personal pride that you go out there and play against some very good players and a good team.”

“You don’t have to be happy to stay positive.” Great quote from Solskjaer.

Also, when United We Stand editor Andy Mitten made a valid point about United’s inconsistency, Solskjaer responded: “Every game lives its own life and there are fine margins, I’ve said that many times and the performances.

“The results create the headlines and backdrop and in games that you win you’re praised and ‘that’s a fantastic performance’. Sometimes you lose and are criticised but it’s not as black and white as that.

“We definitely searching for the consistency, something we need to improve on, we need a response against Everton.

“I come back to what I said earlier on with the players and times we live in, that has to have an input in people’s daily life and mental health at the moment, sometimes you think about how focused the players can be on football and sometimes after defeat it’s easier to focus on ‘I need to get back to preparing well’.”

Listen to our latest podcast on the pressure mounting on Solskjaer.