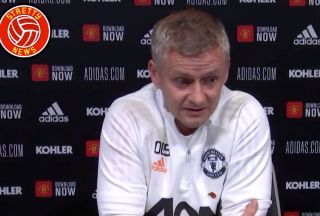 Carlo Ancelotti’s main man up front has been scoring goals with the side in-form, currently sat in 4th, but they go into Saturday’s game on the back of two defeats — like Manchester United.

Solskjaer needs a response from his players after two shocking performances against Arsenal in the league and Istanbul in the Champions League.

More questions are being asked about his future than ever before — Solskjaer knows another defeat this weekend could lead to the end of his time at Old Trafford. Maybe not immediately but things are not looking good.

Everton pose a threat this weekend because they’re a good side with a very good manager.

Solskajer was asked specifically about Calvert-Lewin, but he took the chance to give Ancelotti credit for turning things around at Goodison Park.

“Not just Dominic Calvert-Lewin, the whole team, set-up,” Solskjaer said, as per the Manchester Evening News.

“When Carlo came in, that’s a manager everyone admires, players, coaches, other managers, he’s had a fantastic career and you starting having a look. [sic]

“They didn’t have a very good period after restart but now you can see what he’s been working on, good pre-season, he used restart to look at his team and I’ve been impressed.

“Calvert-Lewin has been part of that and is integral to their play.”

🗣 "When Carlo came in, that’s a manager everyone admires, players, coaches, other managers, he’s had a fantastic career and you starting having a look."

Read more: Solskjaer claims to have good and honest relationship with Manchester United board