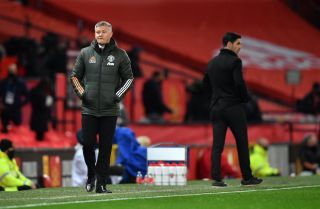 The media are speculating over who will be the next Manchester United manager but Ole Gunnar Solskjaer is still in charge and claims to have a good relationship with the club built on an honest dialogue with the board.

A source close to the club has told Stretty News that the board are behind the manager, so they must feel he can rectify things and the manager has not gave the impression that they are on his heals.

However, The Independent claims that Mauricio Pochettino and Max Allegri are keen to takeover from Solskjaer, which will only intensify rumours doing the rounds.

United go into this weekend’s league clash against Everton on the back of two defeats. Arsenal in the Premier League and Istanbul in the Champions League. Those two performances were shockingly bad and Solskjaer needs a reaction from his players this weekend.

He can hardly afford many more consecutive defeats.

Solskjaer addressed the media today — answering questions about his future at Old Trafford — and has been quoted by the Manchester Evening News as saying he’s always had a good, open and honest dialogue with the club.

“I’ve always had a very good, open and honest and positive dialogue with the club.

“They’ve shown strong leadership since I come in and with me today it’s sunny in Manchester, I don’t expect the wind to turn, always pressure and expectations on us.

“I became a man at Manchester United and have learnt how to deal with good and bad times.

“You’re a top coach or manager when you win and bad when you lose because that’s the last game you played. You aren’t really better than your last game.

“Every game of football becomes history quickly and we need to go into Goodison Park in a positive frame of mind.

Another question posed to the manager pleaded for his views on whether he can turn things around at Old Trafford and promise the fans success in the future. Solskjaer believes he’s the man for the job.

“Yeah, why shouldn’t I be [confident of delivering success]?

“If I don’t trust my belief and values and staffs quality and players’ quality, who else should?

“I don’t look at one or two results and fall like a house of cards, it’s a setback, definitely, there’s been too much made of not scoring against Arsenal and Chelsea, there’ve been nothing in those games and it’s not long ago we were the best thing since sliced bread against Leipzig and PSG.

“You have to have that belief, club have been very positive and shown me their character and strong leadership, I’m looking to Saturday morning, that’s another matter we can talk about.”