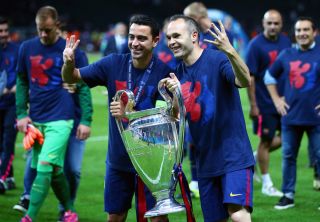 Xavi Hernandes and Andres Iniesta will rightly go down in history as Spain’s best ever footballers.

The midfield duo won the World Cup with Spain but also dominated Europe at club level with Barcelona, with Manchester United feeling the wrath of that in 2009 and 2011.

The Champions League defeat in 2009 was arguably the most difficult one to take in my life as a United fan, but in 2011 we didn’t have Cristiano Ronaldo and it felt very different but still extremely disappointing.

Ethan Galbraith, a young United midfielder who has yet to establish himself in the first team, has been given unbelievable praise from Northern Ireland manager Ian Baraclough.

“Ethan, over the last six months, we’ve seen a maturity in his play and the way he goes about his work day to day,” Baraclough told the official Man Utd website.

“He’s excellent with the Under-21s and he’s a different type of player to anyone we’ve got in the senior squad.

“[..] he has earned his right with the way he has gone about his play for the last six months.

“Not to put too much pressure on his shoulders, but he’s out little [Andres] Iniesta or Xavi, someone who can get on the ball and manipulate the ball and find positive passes.

“One the coming years, he will give us a different flavour to the squad.”

It’s a huge statement for a player who has barely tasted first team football, and it makes me want to see him in action at some point this season.

Manager Ole Gunnar Solskjaer has been a great manager for young players when you consider how many have come into the first team since he took charge.

Mason Greenwood is almost a regular, Brandon Williams played plenty of games last season and Teden Mengi will be getting a look in this season.

Read more: Loads of Man United fans react to news club have contacted Mauricio Pochettino: The good, the bad and the ugly