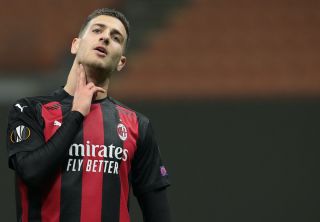 Diogo Dalot was praised for his performance after AC Milan’s Europa League win over Sparta Praha last week, but the Portuguese full-back was unable to follow it on Thursday night when the Italians suffered a 3-0 defeat to Lille.

Dalot scored a goal and registered an assist against the Czech side, but he wasn’t at the races last night.

AC Milan blog Sempre Milan gave the Manchester United loanee a 5 out of 10 in their player ratings after the match, describing his performance as “alright in the first half” but “improved in the second half”. Not to forget how he “could have done better to help out in defence.”

This won’t come as much of a surprise to United fans because Solskjaer hardly picked him last season, and instantly preferred Timothy Fosu-Mensah when the Netherlands international recovered from a long spell out injured.

Dalot was also given a 5 by newspaper La Gazzetta dello Sport who described his display as a ‘defensive disaster’ because he appeared to look ‘lost’.

It seems harsh after his performance last week and it doesn’t sound like AC Milan are at a stage where they regret loaning Dalot. Hopefully he learns from his poor outing against Lille and bounces back stronger.