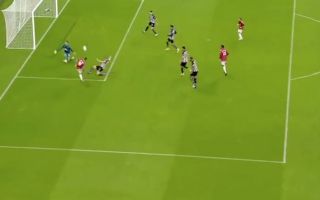 October wasn’t a very good month for Manchester United as far as our Premier League form is concerned.

We really haven’t got going but still managed to beat Paris Saint-Germain and RB Leipzig in the Champions League group stages.

There is no consistency and unless things change I think Ole Gunnar Solskjaer’s job will become untenable.

Bruno Fernandes’ form has dipped as a result and he doesn’t look a shadow of the player who arrived last January. However, that has not stopped him scoring a fantastic goal on the counter attack against Newcastle at St. James’ Park.

The move starts with United defending a free-kick. Harry Maguire makes a headed clearance which Donny van de Beek bravely picks up before launching an attack.

Van de Beek and Fernandes linked up in their own half with a nice little one two before a pass finds Juan Mata in the middle. The Spaniard launches a through ball down the left flank for Marcus Rashford to run onto.

Fernandes, overlapping Rashford, gets the ball inside the box before scoring from a tight angle.

👏 @B_Fernandes8 with a great strike to finish off the counterattack 👏

Our October Goal of the Month winner 🏅#MUFC @OfficialPES pic.twitter.com/qNeEVz60iE