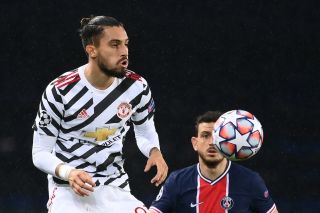 New signing Alex Telles has returned to full training at Manchester United just one day before Saturday’s trip away to Everton in the Premier League.

The Brazilian has made one appearance for the Reds so far — against PSG in the UEFA Champions League — and I would be surprised to see him in the starting line-up against the Toffees because he will probably need more training under his belt after recovering from COVID-19.

Telles tested positive for the coronavirus and had to complete a two-week period of isolation. That saw him miss our recent matches against Chelsea, RB Leipzig and Istanbul (W0-D1-L2).

It has been confirmed via Manchester United’s official website that Telles has rejoined the squad for training on Friday morning.

This is United’s final fixture before the November international break and Telles has already been named in the Brazil squad. The Brazilians have World Cup 2020 qualifiers against Venezuela and Uruguay.

I’m not sure how I feel about international duty during a pandemic because we should be limiting how much our players are travelling during the season.