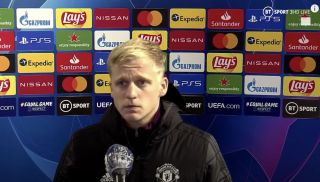 Van de Beek, 23, was named in Ole Gunnar Solskjaer’s starting 11 last night as the Reds hoped to extend their lead at the top of Group H’s table.

However, after an abysmal performance in Turkey, United were left humiliated as they fell to a shocking 2-1 defeat.

United’s performance outlined some major flaws in the Reds’ defensive capabilities as former Chelsea striker Demba Ba had a clean run to goal early in the first-half.