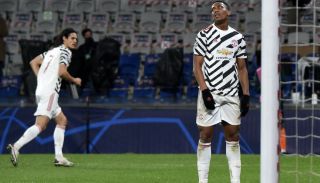 Manchester United legend Paul Scholes believes his old side have just two leaders among their ranks after he declared captain Harry Maguire can be considered a leader alongside ‘possibly’ Bruno Fernandes.

Former midfielder Scholes has backed up concerns previously raised by ex-captain Roy Keane who spoke about United’s lack of leadership after their 1-0 loss to Arsenal last week.

Speaking live on Sky Sports after the Reds crushing defeat to rivals Arsenal, as quoted by Metro, Keane said: “You roll your sleeves up at Manchester United.

Things aren’t going your way and that’s when you need leaders and characters.

“It’s not that I don’t see enough of them, I don’t any see leaders out there. Right through the whole team. From the experienced players. Really really worrying for United.”

Those concerns have been echoed by Scholes who spoke live on BT Sport after United’s most recent 2-1 defeat to Istanbul Basaksehir last night, again as quoted by Metro, Scholes said: “Anything Roy says I tend to agree with.

“But I think Harry [Maguire] is a good leader, there’s not many others in the squad that are leaders.

“Possibly Bruno Fernandes could be.

“I think the problem Harry’s had is his one-on-one defending and Victor Lindelof next to him as well. Which is why he’s needed so much protection.”

Ole Gunnar Solskjaer was forced to watch his United side fall to a crushing defeat in the Champions League which was a competition they had previously found sanctuary in having already beaten PSG (2-1) and RB Leipzig (5-0).

United’s next game is scheduled to be against Carlo Ancelotti’s impressive Everton side next Saturday.

The Reds currently sit 15th in the Premier League table and surely should they get anything less than all three-points on the weekend, the United faithful could be forced to wave goodbye to Solskjaer.