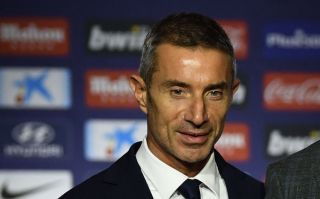 Manchester United reportedly tried to secure Atletico Madrid’s highly-rated sporting director, Andrea Berta but have been unsuccessful one more than one occasion.

Berta, who currently occupies the La Liga side’s sporting director’s position has many years experience in the role having previously been employed by Parma and Genoa before joining Atletico Madrid in 2013.

Berta began his employment with Atletico Madrid as the club’s technical director but was shifted to a more familiar sporting director role in 2017.

According to a recent report from Marca, the Atletico Madrid director is a target for a host of top European clubs including United.

The report claims that alongside the Reds, Italian trio Inter Milan, Roma and AC Milan are all keen to land the sought-after director who is best known for his ability lead a club’s re-build.

Berta is well documented for being responsible for Atletico Madrid’s recent squad re-build after a host of long-serving players departed, including Diego Godin, Juanfran and Filipe Luis.

Marca’s report claims that United have tried to land Berta on several occasions but the Reds attempts have fallen on deaf ears and proved unsuccessful.