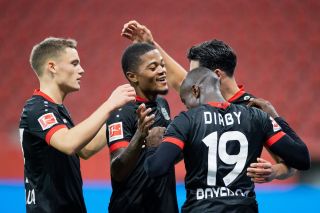 Manchester United reportedly tried to sign Bayer Leverkusen attacker Moussa Diaby but after a £45m attempt was rejected, the Reds were forced to turn their attentions to Atalanta’s Amad Diallo.

Diaby, 21, joined Bayer Leverkusen last summer in a move which cost the club just £13.5m, as per TransferMarkt.

During the young Frenchman’s time in Germany, he has featured in a total of 48 matches and has been involved in 19 goals in all competitions.

According to a recent report from BILD’s written edition (via Daily Mail), United tried to land Diaby earlier this summer and offered Bayer Leverkusen as much as £45m.

The report claims that Diaby’s Bundesliga side were unwilling to sell the talented prospect so soon after letting Kai Havertz join Frank Lampard’s Chelsea.

It is understood that after failing in their attempts to sign Diaby, the United hierarchy made a decision to pursue Atalanta winger Diallo who they eventually signed on deadline day, as confirmed by the club’s website ManUtd.com.

Diallo, 18, has featured in just three games in all competitions for the Serie A side and will join up with United in January due to passport complications earlier this summer.