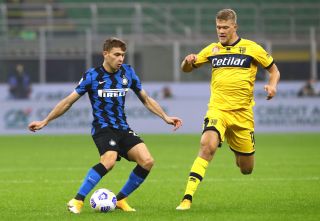 Manchester United are reportedly keen on signing Inter Milan’s Nicolo Barella but Antonio Conte remains committed to offering the highly-rated midfielder a new contract which would see his wages doubled.

Barella, 23, joined Inter Milan from Cagliari during the summer of 2019 in a move which cost the Nerazzuri £22.5m, as per TransferMarkt.

Since Barella’s arrival in Milan, he has gone on to make 50 appearances and has been directly involved in 16 goals in all competitions.

The versatile midfielder is highly-rated in Europe and is widely expected to continue his impressive development.

According to a recent report from FC Inter News, the Inter Milan maestro has caught the attention of some of European football’s biggest hitters including United.

Alongside United, FC Inter News also report that domestic rivals Liverpool and Arsenal are also keen on the playmaker with La Liga duo Barcelona and Atletico Madrid also impressed with the 23-year-old Italian.

The report claims that despite strong interest in him, Barella is keen to help restore Inter Milan to their former glories amid suggestions the club are set to trigger a contract extension until 2015, which would see the midfielder’s €2.5m-per year salary almost double.