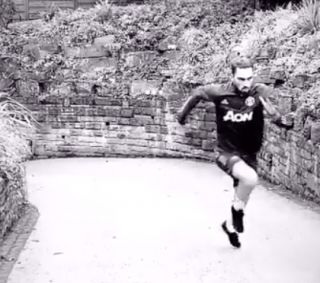 Manchester United full-back Alex Telles has posted a video of himself doing sprints on social media ahead of his imminent return to action.

United’s deadline day signing has not featured for the Reds since an impressive debut in the victory over PSG after returning a positive coronavirus test.

Telles has since missed games against Chelsea, Arsenal and RB Leipzig, and was an unused substitute in the 4-1 win over Newcastle.

The Brazilian is yet to be reintegrated back into squad training after his positive COVID-19 test, so did not travel with Ole Gunnar Solskjaer’s men for Wednesday’s evening’s trip to Turkey to face Istanbul Basaksehir in the Champions League.

Telles’s clip posted on Instagram included the message ‘No Excuses’, while he sprinted up a path.

The 27-year-old is clearly close to a return to full fitness and will hopefully be available for United’s trip to Goodison Park to face Everton on Saturday lunchtime.

Solskjaer has opted to retain Luke Shaw in the starting line-up in Telles’ absence as United look to maintain their perfect start in the Champions League group stages.

See the clip posted on Telles’ official Instagram page below, via Utdreport: