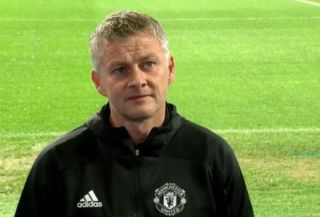 Ole Gunnar Solskjaer has admitted Manchester United’s defensive efforts were ‘unforgivable’ in their 2-1 defeat to Istanbul Basaksehir in the Champions League.

Basaksehir’s first ever victory in the competition heaps further pressure on Solskjaer, after a United showing devoid of purpose, responsibility and leadership.

Anthony Martial’s header on the stroke of half-time halved the home side’s deficit at the break after goals from Demba Ba and Edin Visca.

But United were lacking any creative spark in the second-half and simply did not do enough in possession to get back into the game, despite fielding an abundance of attacking talent late on.

United’s void of ideas in an attacking sense is becoming a serious worry, but the manner in which two goals were conceded in Istanbul took precedent on a humiliating evening.

Solskjaer had no excuses for a truly abysmal showing that ends United’s perfect start to their European campaign.

“Performance wasn’t good enough against a team that ran and worked and caught us on the break,” Solskjaer told BT Sport at full-time.

“We didn’t defend well enough. It’s unforgivable, the first one.

“The second one we weren’t well organised enough to counter-press and win the ball back. Two tough goals to give away and we didn’t have enough to come back in the second half.

“We threw everything at it but we couldn’t break them down.

“It’s set us back a lot. You get a reality check when you play a football game here. You don’t just turn up and get three points in the Champions League. We played against lots of good individuals in a good team, well set up and organised. We weren’t good enough.

“It’s not easy to be positive, not when you play like this.”

United have little time for an inquest into this defeat as they face a trip to Goodison Park to face Everton on Saturday lunchtime.

Solskjaer needs to find a system and a team he can settle on but there will no doubt be a host of changes as the Norwegian looks to elicit a big response from his players.

Saturday’s result could have huge implications for Solskjaer and will give a further indication of the way the season is heading.