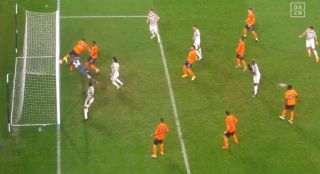 A shocking defeat for Manchester United in Turkey as Istanbul Basaksehir record their first ever win in the UEFA Champions League.

Manchester United suffered their defeat in Europe tonight, losing 2-1 against a side with little experience in the Champions League.

The Reds didn’t deserve anything from the game, but there was a chance late on that saw several United players look towards to referee to see if he’d award a goal our way.

Harry Maguire, who played abysmally in the first-half, got a flick on the ball at the very end but the ball was cleared off the line.

Man Utd have a shot cleared off the line in the last minute 😩#UCL pic.twitter.com/kFzuEkXUMA

It was a superb clearance by the Basaksehir defender and we’re sure he will be one of the more popular players in the dressing room, as well as Demba Ba who scored the club’s first goal in the competition.

The defeat gives either RB Leipzig or Paris Saint-Germain a chance to catch up with United in Group H. That game has just kicked off and we’ll be hoping it ends in a draw.