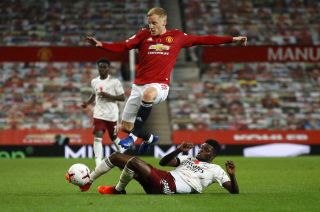 There has been a lot written about Manchester United new boy Donny van de Beek.

As is the case with all new signings, the fans have been super keen to see the Netherlands in action but his time on the pitch has been limited.

“They’ve spent £40m on Donny Van de Beek and they’re not playing him,” Ince told Ladbrokes. “I don’t know why they signed him. Maybe there’s a situation where Pogba could be going at the end of the season and Van de Beek could come in. But if you’ve spent £40m on a player, you put him in! Put him in the team. No disrespect to Fred but do me a favour… Fred’s OK. He’s OK. He doesn’t score goals, he doesn’t set up goals. Midfield players are supposed to score goals. Even when you watch him shoot – he can’t shoot!

“That’s why you spend money on players, but then you’ve got to put them in the team. Bruno Fernandes came in and was straight in the team. Van de Beek must be sat there thinking ‘what have I done?’

Ince went on to criticise United’s recruitment, adding: “Recruitment at United has been really, really poor. They’ve always had money to buy players. If you bring players in for those big amounts and you’re not playing them but the team is winning, then great. When you don’t play them and the team isn’t getting results, people will start questioning Ole about recruitment and results. Those two factors combined are going to put pressure on Ole. Recruitment and results.

“There are so many players out there who could have come into that Man United team. You look at Thomas Partey, Raul Jiminez. Last season United needed to bring in a striker and they go and get Odion Ighalo from China. What was that about? Go and spend £40m on Jiminez. He’s a proven striker, a scorer. You know, and then they go and get Edinson Cavani who will hardly play.

“You’ve got to look at the structure, the recruitment, the scouting system and think ‘what are they looking at?’ There’s a lot of good players out there, top, top players. Go and get these players. But they haven’t. If you’re going to spend the money, put them in the team. I’m not having this ‘you’ve got to give them time’ – you’ve got to put them in there straight away if you’re going to spend that money. Why would you spend £40m on a player who you’re going to just stick on the bench?
“Ole will have wanted these players. As recruitment goes he will have had a list of players and number one targets, number two targets, if you can’t get number one then go for number two, and so on. Ole will have sat down with Ed Woodward, because Ed Woodward doesn’t know about football. He’s a commercial man. He’s done ever so well and he’s generated a lot of money for the club. But as far as football is concerned, he doesn’t know about strikers, he doesn’t know about players. That’s why we’ve always been crying out for a Director of Football, which they still haven’t got. Ole will have made these decisions. Ultimately he would’ve said he wanted Van de Beek. The club has backed him. They’ve given him the players he’s asked for. Compare that with Jose Mourinho – he wanted a couple of centre-halves and didn’t get backed, and that’s one of the disappointments Mourinho was talking about.
“If you want the player and the club pay for the player – play the player. If you don’t play him and the club have backed you, and you’re sitting where you’re sitting in the league – granted it’s early doors – you put yourself under pressure, and that’s where Ole is right now. Under pressure.”