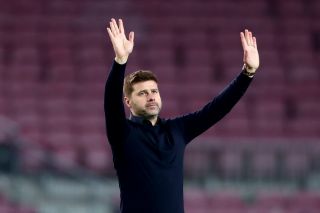 In light of United’s patchy form and clear inconsistencies, the club are on red alert after the Argentine stated he was “ready to be involved [in management] again”, via Sky Sports.

🗣 "I'm ready to be involved again"

Mauricio Pochettino when asked about a potential return to management pic.twitter.com/4pEBNDNgh5

Pochettino enjoyed a very successful spell at Spurs between 2014-2019, reaching the League Cup final in 2015, a 3rd place finish in 2015/16 and a Champions League final appearance. His side managed the highest ever league points tally (86) in the north London club’s history.

The manager’s dismissal came as a huge shock to football fans, being shown the door just 6 months after he led the club to a Champions League final against Liverpool. Former United boss Jose Mourinho has since taken charge at Spurs, with many still left scratching their heads at what exactly Mourinho offers that Pochettino doesn’t.

Manchester United’s slow start to the domestic campaign spells danger for Ole Gunnar Solskjaer – with legend Roy Keane stating he believes the players will cost the Norwegian his job.

“We were almost building up this season as make-or-break for Ole, but at this moment in time it’s not looking good for him. I scratch my head at players who don’t have enthusiasm for a game of football. “Ole will lose his job working with these players – that’s what is going to happen” (via Sky Sports).

If Pochettino ever does end up in the home dugout at Old Trafford – the feeling will be familiar. In his most successful season at Tottenham, the club brought in zero signings (via Transfermarkt) in that summer window. Failure to properly back managers is something the Glazer family pride themselves on.

Throughout the 2018/19 season, Mauricio Pochettino proved his worth as a world-class manager, doing a lot with very little to work with. An interesting prospect is whether he would be able to attract Harry Kane to Manchester – slight déjà vu from the Alan Shearer saga.

Manchester United fans are quick to say they think Pochettino would currently be doing better than Ole with our squad, but each managers respective results against the top 6 are eye-opening.

With Pochettino having a much larger sample size, it’s harder to tell whether the Argentine really is a more effective manager in big games or not. It’s difficult to see the former Spurs boss out of a job for much longer – it could be now or never for United.

Ole Gunnar Solskjaer’s rebuild at Manchester United can only happen if he gets the players he wants to suit his system – and after ESPN reported the club failed to land a single one of the Norwegian’s targets (including Jadon Sancho and Jack Grealish) this summer, what’s the point of him being at the helm?

If the board are willing enough to back Mauricio Pochettino with the players he suggests, it’s hard to look past the impact that may have on the club’s success. If United’s form continues to dip (looking likely), Ole could be relieved of his duties before Christmas in the same fashion as Jose Mourinho 2-years-ago after he also wasn’t backed to the extent he should’ve been.

If a football club ignores the manager’s transfer targets and fails to control finances effectively, huge success can’t be a realistic expectation.

Pochettino has already proven he can manage good results with little to no backing but even that didn’t come with silverware.

The Glazers can rinse through as many managers through this football club as they’d like – by the end of the manager’s reign it will always be the same result. It happened to Moyes, Van Gaal, Mourinho and now Ole is being hung out to dry in the same way.

One response to “Opinion: Is Mauricio Pochettino the man to save United?”