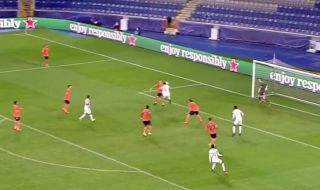 Manchester United are trying to force a comeback against Istanbul Basaksehir after going two goals behind in the first half.

Both goals scored by Istanbul could have been avoided but United’s defending has been shambolic.

It wasn’t looking good for Ole Gunnar Solskjaer’s future because there is no denying that the defeat at the weekend against Arsenal put more question marks over the manager’s head.

At least we managed to pull one back before the break!

Luke Shaw gets his share of criticism for not being the most effective going forward, but he will be delighted with his assist for Anthony Martial tonight.

The left-back swung his cross in before Martial headed home to make the scoreline 2-1.

Check out the goal below – footage courtesy of RMC Sport 2:

The lads face an uphill climb to win the game after the break… BELIEVE!