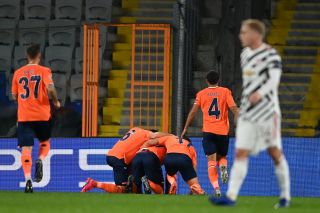 Manchester United have gone a goal behind after some atrocious defending against our Turkish opponents Istanbul Basaksehir.

The Reds started the game much better than the home side but were caught on the hop when Demba Ba ran most of the pitch without any defenders in sight.

A crazy moment in real time and it puts United behind and they now face an uphill climb to win the match.

The former Chelsea striker remained calm as he approached Dean Henderson before sending his shot around the goalkeeper and into the net.

Check out the photo below – courtesy of BT SPORT – and notice how Demba Ba had half of the pitch to run into.

Nemanja Matic got close to him but he was still able to put his effort away and give Basaksehir the lead.

United fans have reacted angrily to going behind on Twitter:

Absolutely comical. What the hell is going on

People will blame the manager but im 100% sure there are players that are supposed to stay back on corners so this goal is on whoever that is.

If both centre halfs go up surely at least one of the full backs sit. AWB was attacking in the corner…. Where was Shaw?

Aren’t these things coached? I mean teach their teams how they set up in various instances in a match right?

Every day I see training pictures of man United players, but I keep wondering what they really do in the training.