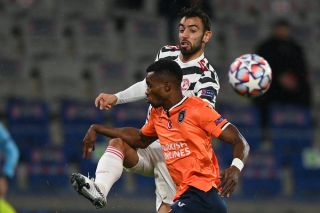 The result puts a disappointing dint in our European form after impressive wins over Paris Saint-Germain and RB Leipzig, and none of the players on the night will be happy with their performance.

That’s why the ratings tonight are low. Let us know in the comments if you think we’re being harsh or even overly complimentary…

Aaron Wan-Bissaka – Not as solid defensively as he’s shown in the past. 4

Harry Maguire – Woeful first-half, a shadow of the player he can be. 3

Nemanja Matic – Poor first-half before moving to centre-back after the break. Had little to do in second half. 3

Donny van de Beek – Started brightly but faded after Basaksehir’s opening goal. Better in the opening stages of the second half but replaced an hour into the game. 5

Juan Mata – Gave the ball away for Basaksehir’s second. 3

Marcus Rashford – Ran at defenders and showed glimpses of skill, but it wasn’t his night in front of goal. 5

Paul Pogba – Offered little when he came on. 4

Edinson Cavani – Closed down defenders but didn’t bring anything extra to our attack. 5