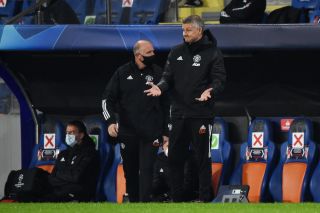 Manchester United’s perfect start to their Champions League campaign has ended in humiliating fashion with a 2-1 away defeat to Istanbul Basaksehir.

Basaksehir’s famous victory over the Reds was their first in Champions League win in their history, and has mounted more pressure on United boss Ole Gunnar Solskjaer.

Solskjaer promised a reaction after the drab showing against Arsenal but his players failed to deliver again, with chances few and far between against the weakest side in the group.

United were all at sea defensively, devoid of ideas in attack and deserved their second defeat in the space of three days.

Solskjaer fielded almost every attacking player in his squad this evening, but it simply wasn’t enough as a complete lack of organisation, shape and pattern of play was highlighted once again.

United have lost their fourth game out of 11 this season and serious questions need to be asked of both the players and the management.

See some reaction from furious fans on social media below:

Looking forward to all the United players posting later that "We're working hard" and "We go again" later. Most of them just aren't good enough for this club

MUFC's win of 10 straight away wins ends with 1-2 defeat in Turkey. Second straight defeat and fourth in 11 games so far this season. Not good enough is it? Paid for dreadful first half. MU players straight off at the end. Big celebrations from Istanbul players. Ratings to follow

In a game Utd needed to win to take the pressure of their manager against a team who have never won a champions league knockout game ever (until now) Utd proceeded to lose that game whilst conceding one of the worst goals you'll ever see at this level. That's it.

They’ve just got to make the change during the international break. The experiment is over.

This might not be quite so worrying for United were they actually creating anything. They’ve done absolutely nothing in the second-half, despite playing just about every attacking player they have at some point

Feels like we're entering into a bad place right now I cant lie! Embarrassing tonight the whole second half was shocking to. Saturday is even bigger now.

There can’t be any United fan that is even surprised by these results anymore. It’s not this result, Saturday’s result or any other isolated game that will cost Ole his job, it’s making the same mistakes time and time again and showing no plan and no consistency in 2 years.

Ole will pay the ultimate price but shocking all round that, from everyone. No leadership on or off the pitch. Disgraceful.