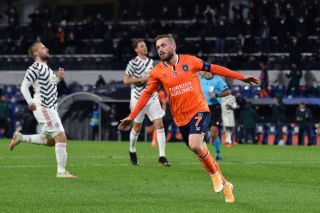 Anthony Martial has salvaged something for Manchester United to cling onto from a truly calamitous first-half showing against Istanbul Basaksehir.

The Reds fell behind in extraordinary circumstances after abandoning their defence and allowing Demba Ba the freedom of Turkey to run through and slot past Champions League debutant Dean Henderson.

Just before the break, Ole Gunnar Solskjaer’s men switched off again as Deniz Turuc squared to Ba, who dummied for Edin Visca who then fired home.

Fortunately for the Reds, unmarked Martial brilliantly netted a pin-point header from Luke Shaw’s cross just after to halve the deficit.

United have been completely off the pace in a game where a response was expected after Sunday’s defeat to Arsenal.

Solskjaer desperately needs to elicit a reaction from his players at half-time to avoid an embarrassing night in Turkey.

The system currently isn’t working and surely the manager needs to make a change of personnel at half-time to turn the tide.

Unsurprisingly, supporters have reacted furiously to some of the defensive performances with the Reds all at sea in the opening 45 minutes.

Demba Ba had so much freedom in front of goal he thought Steven Gerrard slipped again. #UCL

I mean. That was shocking from everyone… but anyone know where Luke Shaw was while Istanbul were attacking? 👀

MUFC 2-1 down at HT near Istanbul. Small group of home fans very vocal. Cold air smells of Turkish tea. United's defence plan to come back from the Asian side of the Bosporus for the second half.

If Utd do in the 2nd half what they done in the first Solskjaer is dead. His senior players have played like they're completely uninterested & it's a chore to have to play for this United. They know this is a game he has to win.

In a game Utd players know they need to win to take the pressure of their manager, they have played like winning is the last thing they want to do. Every other time OGS has been under pressure, they've responded. Next 45 will tell you what the players think of OGS.

Paul Scholes on Demba Ba’s goal: “That goal is completely down to organisation. It’s like Under 10’s football. What the back four were doing I have no idea, it’s embarrassing.” [BT]

Ole's getting the sack if this carries on. A complete breakdown of organisation and defensive structure. Maguire is not helping matters. Two of the worst goals you'll see all season. Great header by Martial, but this isn't good enough from #MUFC. Mistakes are a bad habit.

I’ve supported Ole from the start but this is just so disgraceful.