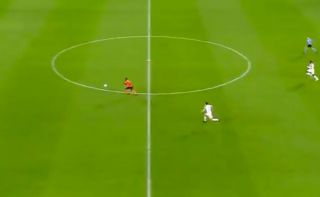 Manchester United have fallen behind in extraordinary circumstances inside the opening 15 minutes of their Champions League tie away to Istanbul Basaksehir.

United completed abandoned their defence and it was almost as if the four defenders had forgotten their responsibilities entirely.

With Axel Tuanzebe and Harry Maguire nowhere to be seen, Ba was found with a speculative Istanbul clearance and found himself with the whole of United’s half to run into.

The 35-year-old striker kept his composure and slotted past United’s Champions League debutant Dean Henderson to give the home side a shock lead.

Ole Gunnar Solskjaer’s blood must be boiling after what he has just witnessed.

The Reds trail in Turkey.