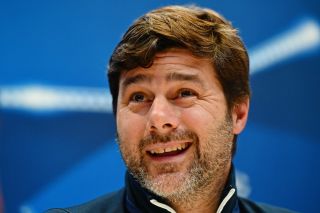 When Mauricio Pochettino – dapper, full of energy and articulation – appeared on Monday Night Football – it seemed more than simply co-incidence.

Almost a year after leaving Spurs, the likeable manager looked raring to go and, according to various sources (via Sky Sports), admitted he’s ready to return to the pressure cooker world of professional football. With Ole Gunnar Solskjaer walking a permanent tightrope, there was only one conclusion: here was Manchester United’s next manager in waiting.

It seems only a matter of time now – a case of when, not if, United turn to the Argentine as the next man to revive this sleeping giant and have a crack at the most high pressure job in the game. The poisoned chalice, the impossible job. Indeed, a case could be made that Pochettino would be out of his mind to take it – such is the mess United have been, and continue to be, both on the field and off it. The club is run like a bank, there’s no football knowledge on the board and there’s no ambition for success. This club don’t want to win the major honours. That’s a story for another day, but it says something that we’ve had such a high turnover of managers (Messrs Moyes, Van Gaal, Mourinho, Solskjaer and now almost certainly Poch) without getting anywhere near.

There’s no doubt Pochettino is a nice bloke, he’s articulate, intelligent, well spoken and his fire hasn’t been doused despite being sacked by Tottenham.

But therein lies a problem in itself – the vast majority want a Spurs reject at our club. Not just any club – Manchester United, the biggest name in football. A name known the world over for football par excellence. Things may not be that way now, but we still have high standards. In six years in management, Pochettino has won as much as the next person. Zilch. Zero. Nothing. Nada. And yet he’s seen as the answer to a problem that proved beyond even the capabilities of Jose Mourinho.

The same could be said for Solskjaer, but mitigation can be made in that he’s a club legend and we hoped to develop him. His popularity and cult hero status was enough to cover the fact he had no CV to speak of and had only a couple of titles in Norway (hardly a football hotbed) to his name. Pochettino has no such endearment. Solskjaer has wriggle room because of his history with United. Mourinho had the CV but was a divisive appointment. Pochettino sits somewhere in the middle. I would, of course, back Pochettino if, or indeed when, he is appointed at Old Trafford. I always support every manager that come into my club and wants him to do well. Pochettino would be no exception but for me, there is considerable caution amidst the clamour.

Pochettino undoubtedly did a good job at Spurs – taking the perennial underachievers and much-mocked also rans of Tottenham into regular top four finishers and consistent Champions League participants. This despite having a net spend of 90m, with only six players having cost over 20 million during his reign, as per Sky Sports. But he won nothing but plaudits and his best achievement remains reaching – not even winning, but merely reaching – a Champions League final. I’m not interested in people that NEARLY win things. It baffles me that Pochettino is seen as some sort of saviour based exclusively upon this. Our saviour is a man that almost won a trophy? I almost won the lottery once but it doesn’t qualify me to run a huge organisation.

I fear that Pochettino has already scaled the peak and reached his ceiling. Reaching a Champions League final and failing to win it is not world level and I fear Spurs is his limit. Ask yourself this: almost a year after his departure from Spurs, why has Pochettino not been picked up by another club?

Juventus could have appointed him to replace Maurizio Sarri, Bayern could have gone for him but chose Hansi Flick instead and Barcelona turned to Ronald Koeman to replace Quique Setien. In fairness, Pochettino did say he’d never manage the Nou Camp side due to his links with their city rivals Espanyol, but you get the gist.

His tactics aren’t revolutionary. He plays the same way as Solskjaer likes – in a high pressing, high energy 4-2-3-1 that is often quite rigid. His substitutions are often made late on in a game and his sides play quite narrow. Hard work is the epitome of the Pochettino mantra. This could be considered both a positive and a negative – a similar style means he wouldn’t need to change much, and the players we have would be familiar and comfortable in his preferred system. But then if he’s too similar, does that help us? That almost defeats the object of why he’s there in the first place.

United have tried everything when it comes to the managerial raison d’être. The safe, slightly left-field option of the established tried and tested in David Moyes. The big world class manager, the no nonsense and the big personality offered by Louis van Gaal and Mourinho. The romantic notion of the bona fide club legend leading his beloved club back to the glory days in Ole (at least that was the theory). Nothing has worked and that brings me back to my earlier point – if van Gaal and Mourinho failed to achieve what they were brought in to do – then what makes us think Pochettino can do so.

There’s no obvious answer here. Max Allegri, still out of work after leaving Juventus, has both the big club experience and the silverware on his CV that’s more befitting of a United manager. But he reaped the seeds sown by his predecessors in Turin and only did what everyone else does with the Italian giants as a serial winner of a league that his former club always dominate. We were unhappy with Mourinho’s defensive pragmatism and Allegri is much the same. The club would be repeating their mistake if they hired Mourinho 2.0. Allegri is very similar in style, focusing on organisation and a possession based game. He is mainly a defensive manager, the very same stick we all beat Mourinho with for the best part of two and a bit years.

If Mauricio Pochettino is the answer, what is the question?

2 responses to “Opinion: Caution amidst the clamour for Mauricio Pochettino”