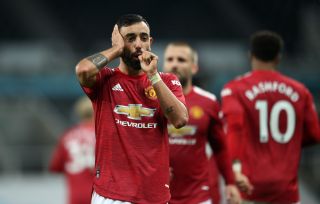 Manchester United midfielder Bruno Fernandes has taken to his social media to praise former academy starlet Angel Gomes after he scored a penalty in Boavista’s 3-0 win over Benfica yesterday.

Whilst in action last night for Portuguese side Boavista, Gomes scored a penalty against Benfica and current United midfielder Fernandes was quick to praise the youngster.

Fernandes, who watched the former United youngster score against his old rivals took to his social media to post footage of Gomes’ goal with the caption (direct translation): “Calm that. The ace is back.”