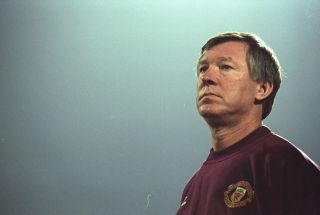 Here’s a special bonus episode of the Strettycast, in which I chat to John Silk about his brand new book ‘Even the Defeats’. It’s about the great Sir Alex Ferguson and how he drew inspiration from losses to mastermind some of United’s greatest triumphs.

Follow John on Twitter @JSilk – and you can pick up the book from your local bookshop or online via Amazon.

A heavy 5-1 loss at Manchester City in Ferguson’s early tenure led pundits and supporters to question the Scot’s position, but by the season’s end he was holding aloft his first trophy at the club -the FA Cup. This trend continued when an end-of-season collapse handed Leeds United the league title in the spring of 1992, only to galvanise United to their first championship in 26 years the very next year. From struggles in Europe to winning the treble, from losing the title on goal difference to their city rivals to winning the Premier League in Ferguson’s final season in charge -rising from the depths of despair to achieve glory, and using failure to fuel success, was arguably Sir Alex’s greatest strength. John Silk brings you the inside story of what made Ferguson tick, with views from players, coaches and other members of staff from the great Scot’s reign.

Even the Defeats reveals how Sir Alex Ferguson discovered a roadmap for glory in some of Manchester United’s most painful defeats. Read and find out how the legendary Scottish manager found solutions to problems during his early days, none more so than after a 5-1 thrashing at the hands of Manchester City.

Or about the time when United and Fergie’s world came crashing down after losing the league to Leeds United, which triggered title success a year later to end 26 years of hurt•How Ferguson scratched the Champions League itch that had been irritating him for so long.

What Sir Alex learnt from losing to some of his greatest adversaries, before eventually overcoming them•How he managed to rouse himself and the team one last time after the final-day title loss to their cross-city rivals.

The Author: John Silk is a journalist working for German public international broadcaster Deutsche Welle. He has covered sports and international affairs for more than a decade. He has contributed to newspapers, radio channels and TV stations across the globe, including the BBC, The Guardian and goal.com. He has followed the ups and downs of Manchester United for almost 40 years.