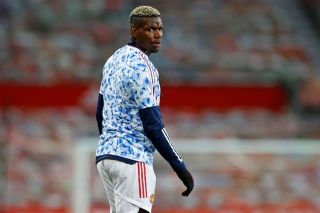 Ole Gunnar Solskjaer has publicly backed Paul Pogba after his disappointing performance against Arsenal on Sunday.

The Frenchman wasn’t the only player to put in a below par performance, but it was his costly mistake which saw United concede a second half penalty after he clumsily fouled Hector Bellerin inside the box.

Pierre-Emerick Aubameyang scored from the secure three points for Arsenal — their first win at Old Trafford since 2006.

Solskjaer has dropped Pogba already this season — versus Newcastle last month, when his lethargic start to the campaign was put down to testing positive for COVID-19 in August.

He played well against RB Leipzig and made a positive contribution from the bench versus Paris Saint-Germain.

“Every player is frustrated [with] himself and is disappointed after a defeat and we need consistency from every one of our players,” Solskjaer said (via Manchester Evening News). “That’s what we want.

“Paul has been going through a difficult period with an (ankle) injury last season and COVID now, he’s working up to full fitness, but we’ve seen plenty of positives lately and hopefully that will continue.

“Any situation, you’re a fit lad and Paul knows in that exact instance he could’ve dealt with it better and he’s held his hand up.

“But that’s how it is in a game of football, it’s high-tempo intensity and the fitter you are the more you can do, and that goes for every footballer around the world.”

While our Premier League form has been abysmal, Solskjaer has got it right in Europe and we’re just two wins away from qualifying for the knockout stages.

That’s not bad considering United were drawn into what immediately became known as the group of death.

Solskjaer has downplayed the suggestion that United could be considered the favourites to win the UEFA Champions League.

“The results can sway the whole picture so many times,” Solskjaer added. “Sometimes there are fine margins in games, we have had some good games where we’ve not got the result we deserved, these two (wins against PSG and Leipzig) have shown quality we have but we are not going to get too far ahead of ourselves.

“We look forward to the next game as Harry [Maguire] says as well, keep working to get that consistency. Us at our best level we can beat anyone and that’s how we need to go into every game.”