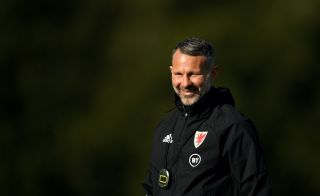 Manchester United legend Ryan Giggs, who was arrested on suspicion of assaulting his girlfriend on Sunday night, has denied the allegations.

Giggs, 46, made 928 appearances for the Red Devils and scored 161 goals in all competitions after a 27-year long career with Sir Alex Ferguson’s United.

The Welshman’s playing career is littered with silverware after the legendary winger lifted a staggering 35 trophies including 13 Premier League titles and two Champions League trophies.

However, a shadow has recently been cast over the former star after recent reports claimed the current Wales manager was arrested on Sunday night after local police were called to his address at 10.05pm following reports of a disturbance.

The former United winger who now co-owns Salford City Football Club was arrested on suspicion of assaulting his girlfriend, accusations his representatives now strongly deny, according to Sky News.

The Welsh FA (FAW) were set to announce their international squad for the country’s next set of international fixtures against Republic of Ireland and Finland yesterday, however, following manager Giggs’ arrest, the football association has since delayed their announcement.

A recent statement from Greater Manchester Police said: “Police were called at 10.05pm on Sunday 1 November 2020 to reports of a disturbance at an address in Worsley.

“A woman in her 30s sustained minor injuries but did not require any treatment.

“A 46-year-old man was arrested on suspicion of section 47 assault and section 39 common assault. He has since been bailed pending further enquiries.”

“He is cooperating with the police and will continue to assist them with their ongoing investigations.”