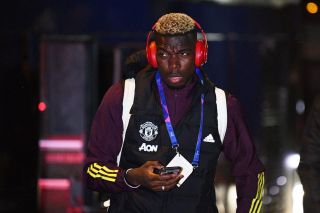 Former Manchester United coach Rene Meulensteen has given a damning verdict on current midfielder Paul Pogba after the Dutchman declared United’s number-six is not ‘world-class in any shape or form’.

Pogba, 27, departed United’s youth academy in favour of Juventus in 2012 and re-joined from the Serie A champions in 2016 in a move which cost the Red Devils a whopping £94.5m, as per TransferMarkt.

The French World Cup winner has made a total of 173 appearances in all competitions for United and has been directly involved in 74 goals.

However, a hugely inconsistent four-year spell has seen the Frenchman come under constant criticism with his latest poor performance coming during United’s 1-0 defeat to Arsenal last weekend.

Speaking exclusively to Stadium Astro (as quoted by Goal), United’s former coach Meulensteen believes his old side’s record signing has fallen short of the mark, he said: “You can have all the talent in the world but it’s about hard work, and it’s hard work that brings that quality to the surface.

“For me, he hasn’t worked hard enough. I can see it all the time, it’s too slow, it’s laboured and there is no urgency about it and other teams can capitalise on it.

“I would never use world class so easily because I know players past and present and they deserve the accolade of being world class. In my opinion, Paul doesn’t deserve that in any shape or form because I don’t think he’s lived up to expectations.

“I don’t think we expect too much of him because of the player he has been and the trophies he has won.

“We need to expect even more from him, but that only comes from working hard. That then rubs off on other players. Not working hard does as well because they start to question those performances.”

Sir Alex Ferguson’s former right-hand man’s damning assessment of Pogba comes just weeks after the club announced they had triggered a one-year extension in the midfielder’s contract, as per Manchester Evening News.

However, there is a general thought among fans and pundits alike that the Reds could be looking to cash in on their star midfielder who, without a contract extension would have been able to speak to non-domestic clubs as well as January 2021.

Will Pogba be a United player beyond the summer of 2021? – Let us know in the comments.