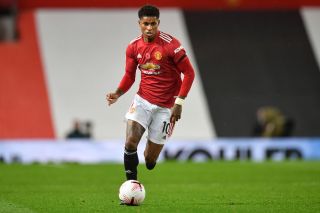 Marcus Rashford has urged his Manchester United teammates to bounce back from Sunday’s 1-0 defeat against Arsenal at Old Trafford.

The result came as a blow after beating Bundesliga outfit RB Leipzig 5-0 just days before, but this is just another example at how inconsistent this Manchester United team is.

Ole Gunnar Solskjaer’s side are back in action on Wednesday night when they take on Istanbul Basaksehir in the Champions League. Although the Reds have been awful in the league this season, their perfect record in Europe shows that they can win games. Just not consecutively across competitions.

Rashford admits the loss against Arsenal has been tough for him and his teammates to take.

He told the club’s official website: “It’s been tough.

“Obviously, we’ve had a lot of big games and games we need to get points in. It’s been a bit up and down but it’s like that sometimes.

“Like you say, it’s been an alright month but, for now, it’s all about sticking together and finding a way to win games and really picking up the belief.

“We always bounce back when we don’t do so well and I think it’s another one of those times.

“We have to come together as a team, get back to the basics, and win games.”

Rashford has been in the headlines for his incredible work helping children who are in poverty — as well as scoring a hat-trick off the bench against Leipzig.

Now he is calling for a switch in mentality and to focus on the upcoming match against Basaksehir.

“As a club, that’s our next focus now,” Rashford added. “We’ve analysed the Arsenal game and we can’t dwell on that for too long, otherwise it will affect our next performance.

“It’s important we go there with a fresh mind, a clean slate, play well and win the game.”

Next up for United in the Premier League is Everton, who at times this season have looked a decent side which Carlo Ancelotti can take a great deal of responsibility for.

The Reds cannot afford another defeat in the league this weekend and it’s beginning to feel like time is running out for Solskjaer.