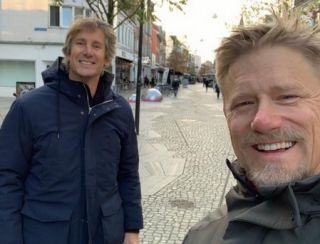 Only two goalkeepers come to mind when we discuss who was the best to play for Manchester United.

David de Gea is up there but Edwin van der Sar and Peter Schmeichel take the lead in our keeper charts.

Van der Sar is currently in Schmeichel’s homeland of Denmark and the pair have met up.

No masks in sight as they are not mandatory in Denmark unless you are using public transport or in close contact to numerous people, as per thelocal.dk.

The photo and caption below was initially shared to Van der Sar Instagram story, although Schmeichel also tweeted about their meet up earllier today.

Van der Sar added text to the photo, stating: “When in Denmark always good to bump into the best GK @manchesterunited ever had.”

Schmeichel said: “Look who I met in the shopping street in Herning…!! #MUFC”

Look who I met in the shopping street in Herning…!! #MUFC pic.twitter.com/dKHDeN7t9X

Two legendary keepers. I can’t help but wonder what they had to say about United.

I bet it wasn’t positive after Sunday’s 1-0 defeat at home to Arsenal.