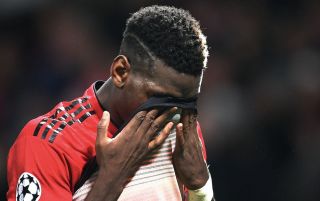 Manchester United are preparing to take-on İstanbul Başakşehir in their third Champions League match tomorrow night as the Reds look to extend their lead at the top of Group H’s table.

United head into tomorrow’s European game off the back of two opening Group H wins against Paris-Saint Germain (2-1) and RB Leipzig (5-0) and currently sit top of the table on six-points.

Elsewhere, İstanbul Başakşehir are winless in their opening two matches and will be looking to get their first points on the board.

Ahead of tomorrow’s tie, we have looked at how we expect Ole Gunnar Solskjaer to line his Reds up.

De Gea is in fine form and will be named in between the sticks after Solskjaer admitted it is the club’s ambition to reach 10-points as quickly as possible.

Didn’t have a great game against Arsenal on the weekend, but who did?

I expect Wan-Bissaka to feature again tomorrow night as Solskjaer should field a strong back-line.

Arguably one of United’s best player at the moment and was definitely the Reds’ best player against Arsenal last time out.

I expect Solskjaer to stick with his Swedish defender again tomorrow night.

Rarely gets dropped and don’t expect tomorrow to be the game we’ll see it.

United’s captain will start at the back again.

New left-back Alex Telles is still expected to be out for some time after a recent positive COVID-19 test, therefore, Shaw should start at left-back again.

Fred and Scott McTominay didn’t have a great game together against Arsenal, but the Reds’ fortunes changed when Matic was introduced.

I expect Solskjaer to go with a midfield duo featuring Matic and Fred with McTominay, alongside Paul Pogba being the ones to miss out.

Had a very good European debut for United against RB Leipzig last week and with team-mate Pogba in dire form, I expect van de Beek to get a start ahead of a dropped Pogba.

Should feature in place of Mason Greenwood if Solskjaer opts to use a 4-4-2 diamond tomorrow.

Suspended domestically and with Cavani still not looking 100% fit, I expect Martial to lead the line again tomorrow.

Coming off the back of his superb second-half hat-trick against RB Leipzig last week, United’s MBE has made it virtually impossible for his manager to drop him.