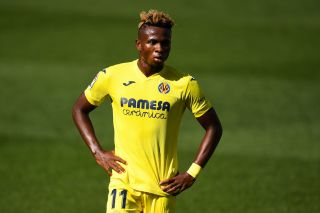 Chukwueze, 21, joined Villarreal’s youth academy in 2017 and has since gone on to climb their ranks to force his way into the La Liga side’s first-team plans.

The Nigerian winger has featured in a total of 89 matches for Villarreal and has been directly involved in 24 goals in all competitions.

The winger who predominantly plays on the right has reportedly emerged as a transfer target for the likes of Leicester City, Wolves Everton and United, according to 90 min.

It is claimed that alongside United, Leicester City, Wolves and Everton; Liverpool and Chelsea are also known to be interested in the talented winger.

Chukwueze is believed to be considering his future as he looks to take the next steps in his already impressive career with the strongest interest in his services coming from England’s top-flight.

90 min also claim that Villarreal are aware of the talent that Chukwueze possesses and have been keen to increase his value through a series of recent contract renewals.

The African attacker is believed to have put pen-to-paper twice in the last 16-months with his latest contract containing a release clause thought to be double what was it was at the beginning of 2019.