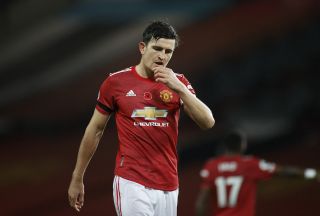 I don’t think many United fans disagreed with Keane’s assessment on Sky Sports at the weekend, nut Maguire is hardly going to nod his head in approval.

Talk is cheap and fans demand better performances from these players. The fact of the matter is these players are not pulling their weight and it’s going to end in tears unless things improve.

After United lost to Arsenal at Old Trafford on Saturday, Keane said (via Sky Sports, quotes cited by SportBible): “I don’t see any leaders out there, right through the whole team from the experienced players.”

That’s an issue and Keane knew exactly how to lead a team when he played for United.

Maguire, 27, has responded to Keane’s comments despite claiming to have not seen them.

Harry Maguire and Ole Gunnar Solskjaer were asked about Roy Keane's comments from the weekend, when he said Manchester United lacked leadership.

Here's what they said 👇 pic.twitter.com/KraRIDAUwf

“I haven’t seen his comments,” Maguire said at today’s press conference, as per Manchester Evening News. “But we don’t look at what’s happening, especially after a negative result, we don’t bring the negativity into the place, we stay positive.

“Obviously, as the captain I focus more on the team than the individual. Defensively we didn’t start in the best shape against Crystal Palace, we were too open. Against Tottenham we left ourselves go, especially when we went down to 10 men. To concede six in any game, especially at this club, isn’t good enough so we’ve worked hard on that since we’ve come back from the international break.

“Since then we’ve been really good and not conceded many chances at all. We feel like we’re on the right track and we’ve got the balance right.

“The main thing is working hard, coming into training each day, trying to improve. We want to be consistent. I feel at the start of last season we were a bit inconsistent with our performances and the results showed that, then we found some consistency after the lockdown period and reached Champions League football.”

I’m fed up of hearing that things aren’t good enough from these players. Do something about it then!

On top of that, what does Maguire mean when he says “we don’t look at whats happening…”?