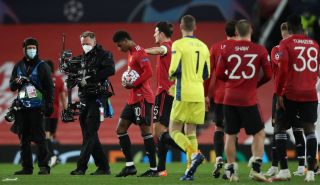 Manchester United will be looking at making a return to winning ways when they face Istanbul Basaksehir in the UEFA Champions League on Wednesday evening in the Turkish capital.

The Reds go into the game on the back of a disappointing 1-0 defeat to Arsenal at Old Trafford whilst the hosts ran out 2-1 winners over Konyaspor.

Defensive duo Eric Bailly and Phil Jones remain out injured, however, Jesse Lingard could be in line to make a return to the squad after training with the squad last week.

Having already taken maximum points from the opening two group games, United are in a strong position to qualify from the group and although on paper a draw wouldn’t be the worst result in the world, United really could do with a victory here to ease the pain from last Saturdays loss to Arsenal.

Inconsistency has remained a key issue so far this season for United. For how well United have performed against the likes of Paris Saint-Germain, RB Leipzig and Newcastle they have been well below par in the games against Tottenham, Crystal Palace and Arsenal and it is that inconsistency that needs to be fixed should United wish to be successful this season.

Games in Turkey in the past have never been easy for United and this one will be no different. The hosts have endured a fairly strong start to the new campaign and whilst Istanbul Basaksehir will be a tough game if United turn up and play to their potential then the reds should leave Istanbul with all three points.

Istanbul Basakeshir’s defense isn’t one of their strongest assets and it’s a defense Solskjaer will undoubtedly look to exploit. Rashford’s pace up top combined with Fernandes, Pogba, Van De Beek and co all supporting from behind will cause their back four all sorts of problems and it that’s attacking line up should prove too much for the hosts and in beating the Turkish side it would give the club a much needed lift and all but guarantee United’s place in the last 16.