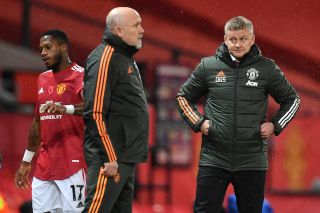 There is no place for new signing Alex Telles, who tested positive for COVID-19 and has no featured since his impressive debut against Paris Saint-Germain two weeks ago.

That gives Luke Shaw another chance to prove himself though it already looks like the Brazilian is far superior going forward which is important if United are to play a diamond in midfield because it’s our full-backs who need to provide width up and down the pitch.

Anthony Martial is available after his domestic suspension came to an end. It could be argued that we missed the Frenchman against the Gunners at the weekend…

Timothy Fosu-Mensah, Teden Mengi, Daniel James and Odion Ighalo are back in the match day squad after missing out on Sunday. However, none of them are likely to start.

Fred and Maguire play rock, paper, scissors to decide who goes in the middle during rondo training 😂 #mufc #mulive pic.twitter.com/CRLJppYLB6

According to the Manchester Evening News, all players have to be tested before travelling to Champions League away games. A positive test for coronavirus would obviously prevent them form travelling and Telles has not been risked.