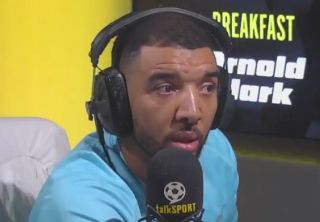 Harry Maguire and Victor Lindelof as a defensive partnership doesn’t fill me with confidence.

And I don’t believe Ole Gunnar Solskjaer has a defence that can win major trophies.

Manchester United have made a promising start in the UEFA Champions League, beating Paris Saint-Germain and RB Leipzig, but you would be kidding yourself if you believe we could go all the way in the competition with the current defence.

Arsenal beat us on Sunday in the league after a lacklustre display from the Reds. Paul Pogba gave away a “stupid” penalty which the Gunners took advantage off in their quest for three points.

However, there has been a lot of debates after the match and one on talkSPORT radio is likely to get people talking.

The Sun’s Neil Custis was on the phone line speaking to Watford striker Troy Deeney, who is acting as a radio presenter nowadays.

Deeney speaks down the reporter and suggests that stats don’t matter as Maguire should have been criticised last season, despite United having one of the best records in the league at the time.

Reluctant to allow Custis to speak, Deeney throws his eyes up to heaven when the reporter gets a word in.

Watch the exchange below via @talkSPORT:

Samuel Luckhurst of the Manchester Evening News nailed it on Twitter, saying: “Worth in future hiring a trained interviewer to interview someone, rather than a petulant footballer. This isn’t a good look for young journalists looking for a break.”

I’m sure there are a number of young journalists who would do a better job hosting that show.