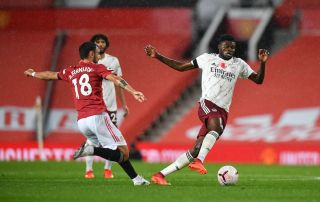 Manchester United’s infuriating inconsistency reared its ugly head again as Ole Gunnar Solskjaer suffered another home league loss on the occasion of his 100th game in charge. Following on from a superb win over RB Leipzig in midweek, United await their first home league win of the season as a Pierre-Emerick Aubameyang’s penalty gave Mikel Arteta’s astute Arsenal side a fully deserved victory at Old Trafford.

Here is what we learned…

Diamonds aren’t, as it turns out, forever for Ole Gunnar Solskjaer. Having deployed the 4-1-2-1-2 system to superb effect against Leipzig in midweek, Solskjaer was outfoxed and outgunned by Mike Arteta, who came up trumps against the United manager for the second time in a row, on the occasion of the Reds manager’s 100th game in charge. Arsenal – superbly well drilled and marshalled expertly by the impressive (if fortunate) Gabriel Magalhaes – defended magnificently, pressed the Reds into submission and dominated the midfield thanks to the outstanding Thomas Partey. United simply had no answer to Arsenal’s high press, struggled to get over half way and were bullied by the former Atletico Madrid man. Solskjaer, ultimately in vain, changed to a 4-2-3-1 in the second half with Paul Pogba pushed to the left but, save for the briefest of 15 minute rallies, even the most ardent United fan cannot begrudge the visitors their victory

Crystal Palace. Spurs. Chelsea. Arsenal. Manchester United have played four league games at Old Trafford so far in 2020-21 and have collected ONE point from a possible twelve. One paltry point. What do these sides have in common? They are, of course, all London clubs and, although there can be a degree of mitigation in the first two defeats – with United clearly lacking sharpness and fitness – we didn’t do enough to beat Chelsea and simply couldn’t get around Arsenal’s high energy, relentless pressing style. United cannot buy a league win at Old Trafford, with Arsenal claiming their first win against any of the so called “big six” in FOURTEEN years. The difference in the Reds between thriving in Europe but yet toiling in the Premier League is baffling. Six games into the league season and United must already be sick of the sight of London clubs. Capital punishment indeed. No player covered themselves in glory. Victor Lindelof wasn’t too bad and Luke Shaw did OK, but no one played well. To see Arsenal come to Old Trafford and win at a canter proved very painful indeed.

Solskjaer marks his 100 with insipid defeat

By hook and sometimes by crook, Solskjaer has reached the milestone of a century of games in charge of Manchester United. Game 99 proved to be one of the best of his almost two years in the hotseat as we battered Leipzig, but he will want to forget his 100th very quickly. Mikel Arteta’s first win at Arsenal boss came against United, and the articulate Spaniard has beaten the Norwegian twice, tactically outclassing him on both occasions and continuing the trend of one step forward and two back. Just when it looks like Solskjaer has reached the end of the road, he pulls a result out but, perversely, every brilliant result is followed by a disappointing setback. As good, as incisive and as clinical as we were against Leipzig, we were lacklustre, bullied, outclassed and run ragged in every department against the Gunners. Inspired one week, insipid the next. Brilliant to alarmingly average inside four days. There’s no consistency at this club. In a game historically synonymous with blood, thunder and visceral feeling, the Reds hardly laid a glove on Arsenal. A game that used to nearly always be decisive when it comes to deciding the major honours passed by with a whimper. Whilst Ole deserves huge credit for the recent wins against PSG and Leipzig, he equally deserves criticism for this awful start in the league. The players let him down badly but Solskjaer had no answer to the questions asked by Arteta’s Arsenal.