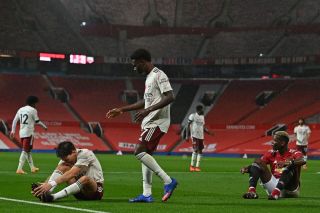 Paul Pogba described his own wrongdoing for Arsenal’s penalty as “stupid” but enough is enough.

Ole Gunnar Solskjaer is under pressure to keep his job as Manchester United manager and he needs to call on the players he can trust most to get him out of this situation. Pogba, quite clearly, is not one of them.

United thought they found a solution with the incredible amount of midfielders at the club – Scott McTominay, Fred, Nemanja Matic, Paul Pogba, Bruno Fernandes, Donny van de Beek — and the maximum you can play is 3 or 4 with a diamond. We are now seeing that it is not as easy as throwing them all in together, and that is a call for Solskjaer to find a team with the best chemistry.

The performance yesterday doesn’t solely fall on the Frenchman but after years of underwhelming performances and dreams of playing for Real Madrid, Dale and Mike argue that it’s time to pull the plug on Pogba.

There’s a problem with confidence, a lack of urgency and the team still lacks shape.

Thanks for your questions ahead of this recording. Get in touch via email if you would like to ask more for next week’s show.