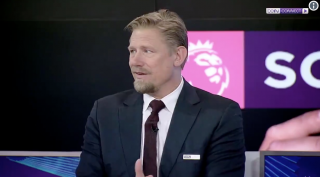 Peter Schmeichel disagrees with the view that Ole Gunnar Solskjaer is lacking leaders at Manchester United, naming five who failed to deliver in Sunday’s 1-0 defeat to Arsenal at Old Trafford.

The defeat to Arsenal was United’s third home defeat in the league in four this season, and Solskjaer’s men are now 15th in the table with just seven points from six games.

United’s diamond system that worked so effectively against RB Leipzig was completely nullified by Mikel Arteta’s side, who outfought and outthought the Reds throughout.

Despite Arsenal having tactical superiority at Old Trafford, many supporters continue to question the leadership within the dressing room that is making United look so disheveled on the pitch.

“We played in a time when everyone was a leader,” Schmeichel told BeIN Sports, as quoted by the MEN.

“That has all changed. You don’t see as many of those types of people any more.

“But I think [Bruno] Fernandes looks like a leader. Harry [Maguire] is a leader. Of course he’s a bit hurt from what he experienced over the summer.

“I know David [De Gea] doesn’t look like it, but he’s a leader as well. I think from what we saw today as well that it’s quite evident that [Victor] Lindelof is a leader.

“I was in Paris for the game against PSG and watching that game up close with no crowd, you can hear people.

“Rashford talks a lot. Marcus came through the academy and he’s a young player. But he’s challenged the Prime Minister, his petition has got more than 1 million signatures. He’s a leader.

“So I’m not saying Manchester United don’t have any leaders, but today they didn’t step up.”

Of course, a lack of distinct leadership is one of many, but perhaps not the most prevalent issue that is resulting in inconsistency and no progression at United.

One hundred games into his tenure, Solskjaer still appears to be working out his best system to play and hasn’t found a suitable way of accommodating his most important players.

It is important Solskjaer finds a solution and United arrest their worrying home form rapidly, or pressure will grow even more on the Norwegian boss.