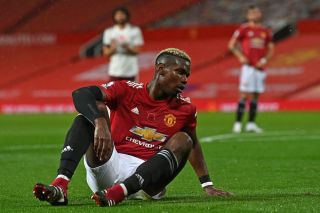 Paul Pogba has attempted to explain his error that led to Arsenal being awarded a penalty in yesterday’s poor 1-0 defeat at home to Arsenal.

The Frenchman was at fault as he brought down Arsenal right-back Hector Bellerin in the box even though the Spaniard was not in a threatening position.

My patience is wearing thin with Pogba, who has given away more penalties under Ole Gunnar Solskjaer than any other United player, and I’m beginning to think it may be time to accept he’s the wrong player for this team.

Speaking after the match, as quoted by BBC Sport, the 27-year-old said: “Maybe I was bit out of breath and it made m e do this stupid mistake.

“I felt like I touched hum a bit and I knew I was in the box. I shouldn’t have given a penalty away like that.

“I’m not the best defensively in the box but I can learn and work on that.”

Pogba was sloppy against Arsenal and clearly lapsed in concentration before giving away the penalty. We can’t afford that in big games and he’s one of the players the team should be looking up to.

I don’t mean to solely point the blame at Pogba but he’s been inconsistent at best since he re-joined the club.

I’m fed up of seeing him shoehorned into the team while Donny van de Beek sits on his rear end.