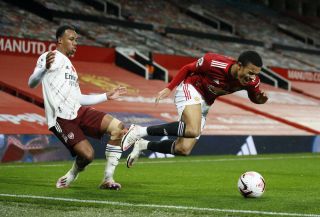 Arsenal defender Gabriel should have been sent off against Manchester United on Sunday.

That may sound bitter because we lost the game, but given how we performed against the Gunners I’m not sure them being down to 10 men would have made much a difference.

United simply weren’t at the races and Arsenal made it very clear on the day that they wanted it more. We spoke more in-depth about the game on this week’s Strettycast (Episode 78) so give that a listen and feel free to give us feedback.

Former Premier League referee Mark Halsey has admitted the decision regarding Gabriel was a ‘subjective’ one.

The controversial moment came in the 73rd minute as Gabriel fouled Mason Greenwood.

Gabriel was already on a yellow card at the time for obstructing Marcus Rashford on a potential break.

Greenwood was hacked to the floor after beating Gabriel with some skill.

Speaking to Caught Offside, Halsey said: “I think the second one, not that we want to see cheap yellow cards in the Premier League, it is subjective, it’s one of those that on another day, another referee would’ve issued a second yellow card.

“I wouldn’t criticise Mike Dean, who comes in for a lot of criticism for handing out yellow and red cards quite frequently, but on this occasion I think it’s subjective.

“I thought Mike took the managed approached to it, warned Gabriel that one more and he’d be on his way.”

“When you referee top games in the Premier League, it’s about managing the game, the occasion and the players and I thought he handled that situation very well.”