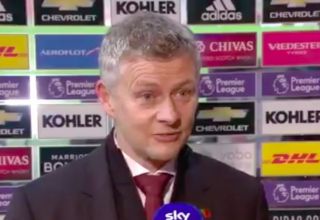 Ole Gunnar Solskjaer admitted Paul Pogba should have stayed on his feet after the Frenchman gave away the decisive penalty in Manchester United’s dismal 1-0 defeat to Arsenal at Old Trafford.

Pogba foolishly went to ground and tripped up Hector Bellerin in the box while the Spaniard was in an innocuous position.

Pierre-Emerick Aubameyang netted the spot-kick midway through the second-half and the Reds had no response in another poor home performance.

Pogba receives plenty of unnecessary criticism for his performances and is often scapegoated, but his decision to challenge Bellerin in the penalty area was lamentable.

The midfielder is a liability defending in his own box and ultimately cost United a point against Arsenal.

Solskjaer stated at full-time that Pogba ‘knows that is a soft penalty to give away’, comparing the decision to when Nemanja Matic went down in the box as the Reds chased an equaliser.

The United boss suggested there was more contact on Matic from Arsenal’s colossal defender Gabriel, but in reality, it was an exemplary tackle and a lesson on how to go to ground in the box from the Brazilian.

Listen to Solskjaer’s reaction to the penalty decision below, via Sky Sports:

🗣"Paul knows that is a soft penalty to give away, similar to Nemanja's one, there is more contact there"

Ole Gunnar Solskjaer on the penalty Paul Pogba gave away which resulted in the winning goal pic.twitter.com/p1PvNR3B6X