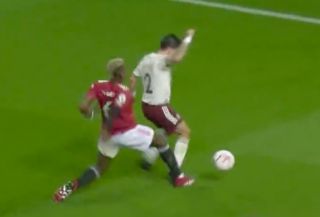 Paul Pogba is a liability defending in his own box and he has cost Manchester United against Arsenal.

United have been improved slightly from a drab first-half but are now chasing the game after Pierre-Emerick Aubameyang converted a penalty in the 69th minute.

Referee Mike Dean pointed to the spot when Pogba inexplicably went to ground and tripped up Hector Bellerin.

Bellerin, played in by Willian, wasn’t in a dangerous position and Pogba’s challenge was senseless at a time United needed to keep their discipline.

Aubameyang then made no mistake from 12 yards as he sent David de Gea the wrong way to give Arsenal the lead.

See Aubameyang give Arsenal the lead below. Footage courtesy of RMC SPORT.