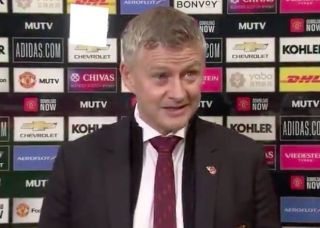 Ole Gunnar Solskjaer has made three changes to his Manchester United team to face Arsenal this afternoon.

United won emphatically against RB Leipzig in midweek, and Solskjaer has opted for the same midfield diamond that worked so effectively against the Bundesliga high-flyers.

Bruno Fernandes replaces Donny van de Beek in the number 10 position; the Dutchman is unfortunate to drop to the bench but his omission is a sign of strength in depth in midfield areas.

Man of the moment Marcus Rashford returns to the starting line-up alongside Mason Greenwood up front, with Anthony Martial serving the last of his three-game suspension.

Solskjaer believes the players he has brought in have earned their place after impressive cameos against Leipzig.

The Norwegian also discussed his personal milestone with today being his 100th game at the wheel as United boss.

Listen to Solskjaer’s pre-match thoughts below. Footage courtesy of MUTV.

READ MORE: Video: Roy Keane’s brutal assessment of Paul Pogba and what he must do better at Man Utd