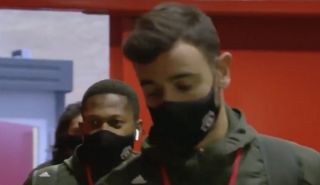 The game which is scheduled to kick-off at 4.30pm UK time will be the 234th encounter in all competitions between the two sporting enemies with United looking to claim their 98th win over the London side.

Ahead of today’s mouth-watering tie, the United squad have arrived at Old Trafford as Ole Gunnar Solskjaer hopes to continue his side’s decent run of form.